Ministry of Tribal Affairs Prime Minister to lead the celebrations of Janjatiya Gaurav Divas as part of Azadi ka Amrit Mahotsav on 15thNovember :

Prime Minister  Shri Narendra Modi will  lead the celebrations of Janjatiya Gaurav Divas as part of Azadi ka Amrit Mahotsav on 15th November. This was stated by the Union Tribal Affairs Minister at a press conference in New Delhi today. The Prime Minister will take part in a major programme at Bhopal being organised on the occasion of Janjatiya Gaurav Divas  in which more than two lakh tribals will join , and he will  virtually launch the Birsa Munda Freedom Fighter Museum at Ranchi, the Minister added.

Thanking the Prime Minister for declaring 15th November as Janjatiya Gaurav Divas, the Minister said that this has filled the tribals with a new zeal and a great sense of confidence. It will be for the first time that programmes will be organised on a large scale to pay tributes to  tribal freedom fighters who have been unsung heroes of freedom struggle till now, he said.

Shri Arjun Munda said that since ancient times, the tribalshave  inhabited border areas, including Jammu and Kashmir,Manipur,Nagaland among others and have played a great role in protection of the country. Even before Independence, tribal heroes have played an important role in the struggle for India’s Independence. Birsa Munda is a very prominent name in this series and thus, the Cabinet under the leadership of Prime Minister has announced  to celebrate his birthday as Jan Jatiya Gaurav Divas. He added that through this gesture, the whole country pays gratitude to the various tribal heroes and the role they played in the freedom struggle. 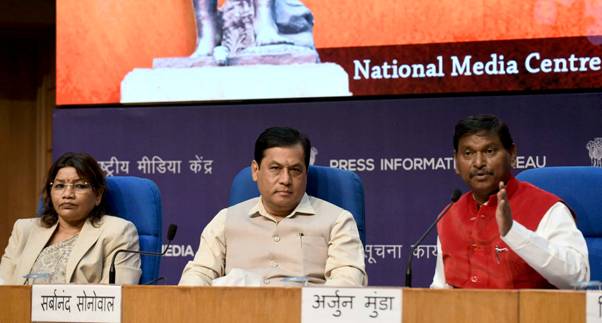 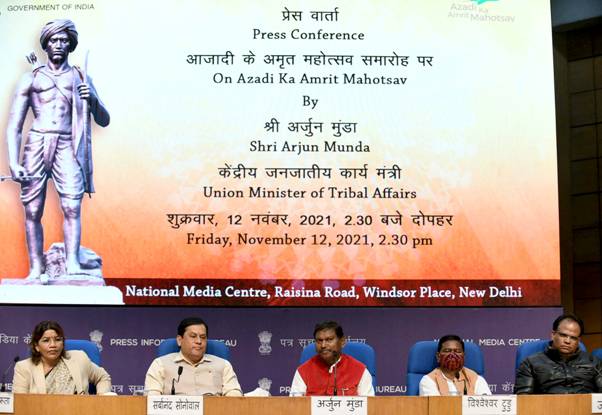 Informing about the various programmes planed for Azadi Ka Amrit Mahotsav,  he said that  programmes are planned from 15th-22nd November to pay respect to the tribal  freedom fighters.He also informed that Azadi ka Amrit Mahotsav will be celebrated across the country including far flung areas.He also added that the celebration will also inspire all to work in the field of education, health for the tribals and also for the conservation of tribal culture and art.

Shri Arjun Munda said   that on 15thNovember, the PrimeMinister willfirst pay Floral tributes at Birsa Munda Statue at Parliament House, New Delhiand will virtually inaugurate the Birsa Munda Freedom Fighter Museum at Ranchi. Giving more details, he said  that the museum is built in the RanchiJail where Birsa Munda died during his incarceration. He also informed that Prime Minister will inaugurate theBirsa Munda Janjatiya Gaurav Diwas officially at Bhopal through a function in which over 2 lakh tribal people will join.

From 16thNovember,National Aadi Mahotsav willbe  organisedat New Delhi which provides a platform for tribal products and showcasestribal art and their culture.

He added that there are many tribal heroes who have scarified themselves in the strugglefor freedom including Rani Durgavati ,Rani Gaidinliu and  Baba Tilka Majhi. More than 85 tribal movements of pre-Independence have been identified and being compiled and more than 200 tribal freedom fighters have been identified by different states, he explained.

Ministry of Tribal Affairs is celebrating Azadi kaAmrit Mahotsav and has sanctioned 10 tribal freedom fighters’ museumsincluding Birsa Munda Freedom Fighter Museum Ranchi. The Ranchi Museum includes completion of conservation & renovation works of Birsa Munda Jail in Ranchi, installation of statues of 13 tribal freedom fighters, light and sound show. All these initiatives and many more to come will now bring out the real contribution of tribal people to the country and also give a roadmap for their all round development, the Minister concluded.