INS Trikand is currently deployed in the Persian Gulf and Gulf of Oman as part of Operation Sankalp, the Indian Navy’s effort to maintain a frontline ship in the region to ensure safe and secure movement of trade, instill confidence in the maritime community and contribute to regional maritime security.

The ship entered Manama, Bahrain, on 13th November 21 for a three-day operational turn round (OTR). During her stay at port, the ship engaged extensively with various maritime security agencies to enhance cooperation in all aspects of maritime security, including training and other mutually beneficial subjects.

Commanding Officer, INS Trikand, Captain Harish Bahuguna, visited the Combined Maritime Forces (CMF) Headquarters at Bahrain on 15th November 21 and called on the Deputy Commander of CMF, Commodore Edward Ahlgren. The port call offered the ship the opportunity to visit the US Coast Guard’s (USCG) Visit Board Search and Seizure (VBSS) facility titled ‘Ship in a Box’. It also enabled a better understanding of the SOPs and training methodologies of other maritime forces, besides allowing the ship’s team to interact with the newly-formed Task Force (TF 59 – Unmanned Force), an experimental unit in a niche domain

Commanding Officer INS Trikand also called on His Excellency, the Ambassador of India to Bahrain, Mr. Piyush Srivastava, who was deeply appreciative of the role the Indian Navy played through such ship-visits in furthering bilateral relations and enhancing maritime security in the region.

INS Trikand is a state-of-the-art guided missile stealth frigate and is part of the Western Fleet that operates under the Flag Officer Commanding-in-Chief, Western Naval Command, based at Mumbai. 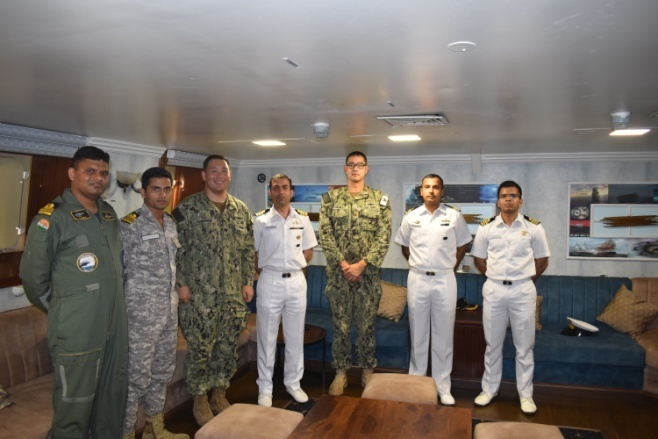