There is  an urgent need to closely review the implementation of PESA to ensure basic rights of tribals: Shri Arjun Munda

Addressing on the occasion, the Union Minister Shri Arjun Munda saidthat when the whole country is celebrating Azadi ka Amrit Mahotsav,in this moment of pride there is an urgent need to closely review the implementation of PESA on completion of its 25 years to ensure basic rights of tribals.

Outlining the spirit of PESA, the Minister said that the basic philosophy behind PanchayatiRaj in our country is derived from the notion ofself-reliance of villages as given by the Father of the Nation – Mahatama Gandhi. PESA seeks to protect the principle of Jal, Jungle , Jameen (Water, forest and land) for the tribals and is the basis of Atma Nirbhar Bharat, he said. The Minister explained that in this 75th year of Independence we need to re-enforce the message of development for the tribals, maintaining their traditional culture and  value system at the same time. 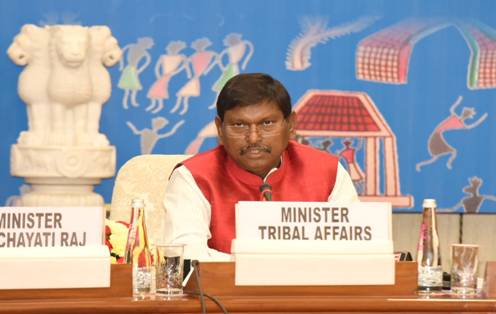 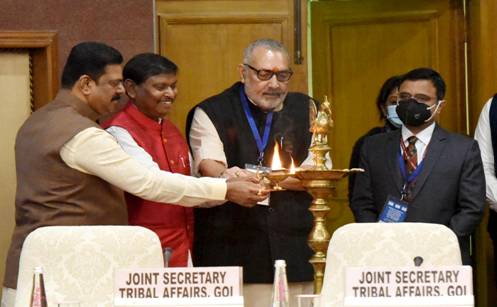 The strengthening and empowerment of the Gram Sabhas is imperative under PESA, the Minister elaborated. But whatever system is evolved has to be in consultation with the tribal people and not be imposed to ensure its proper integration with the tribal  system , only then it can ensure successful implementation, he explained. Sh Arjun Munda stressed upon the need to prevent land alienation of tribals for which a well organised data base has to be maintained.

He specifically emphasised the need for involving civil society and NGOs doing good work in the area of tribals to ensure better implementation of PESA since they are more well versed with the ground reality and  issues faced by the tribal people . The Minister further added that there is a need to have convergence between PESA  and the FRA.He also urgedforholding a joint conference  comprising of officials of Forest deptt, Panchayati Raj and Tribal Affairs  for better coordination in implementation of PESA as well as Forest Rights Act.

Highlighting the role of Governors, Sh Arjun Munda said that Governors are custodians of the Constitution in the states and they have a pivotal role to play in ensuring the Constitutional provisions for the tribal people including PESA. He hoped that they will take a lead in this direction.

Whatever measures we take for the tribal people have to reflect a wholistic and balanced approach, the Minister concluded.

Ministry of tribal affairs, Secretary, Shri Anil kumar Jha said that in the context of Azadi ka Amrit Mahotsav, this is an importance conference of both the Panchayati Raj and tribal affairs ministry on implementation of PESA act,1996. In this regard both ministries need to aim that the law is followed in letter and spirit. For this it is necessary, that there is cooperation among states and union. He further said that in the implementation of the PESA act,1996,Gram Sabha has an important role and any act can be successful only when the people at the grassroot level have participation in it’ simplemention . He further highlighted that cooperation between revenue department, forest department and tribal department need to work together to make the act a success.