Ministry of Tribal Affairs, Government of India organised a National Webinar (Virtual Mode) on ‘Contributions of Bhagwan Birsa Munda for the Struggle of India’s Independence’

Government of India, has announced 15th November, the Birth Anniversary of Bhagwan Birsa Munda as ‘Janjatiya Gaurav Divas’ to pay tribute to the sacrifices and contributions of tribal freedom fighters and for preservation of cultural heritage and promotion of Indian values of valour, hospitality and national pride.

A large number of activities are being organized during the week-long celebrations from 15th to 22nd November in various parts of the country to mark the Iconic Week to remember the great unsung tribal heroes who have sacrificed their lives and contributed to nation building. ST & SC Development Department, Government of Odisha has also planned week long celebrations starting from 15th November to 22nd November 2021 to celebrate and commemorate the glorious history of tribal people, culture and achievements as part of the overall commemorative initiatives under Azadi Ka Amrit Mahotsav. As a part of the nationwide celebration of the Iconic Week of Birth Anniversary of Bhagwan Birsa Munda (15th – 22nd November 2021), SCSTRTI (TRI, Odisha), ST & SC Development Department, Government of Odisha with support of Ministry of Tribal Affairs, Government of India organised a National Webinar (Virtual Mode) on ‘Contributions of Bhagwan Birsa Munda for the Struggle of India’s Independence’ on 15th November 2021, the Birth Anniversary of Birsa Munda.

Shri Jagannath Saraka, in his address mentioned that the tribal communities have enriched the country’s cultural heritage, through their exquisite art and craft. They have played a leading role in promotion, protection and conservation of the environment through their traditional practices. There are many tribal rebellions (about 85) which have taken place against the British Raj to restore Independence and many tribals have been martyred in the process. He congratulated SCSTRTI, ST & SC Development Department, Govt. of Odisha to have organised the National Webinar in collaboration with Ministry of Tribal Affairs, Govt. of India on November 15, the birth anniversary of Saheed Bhagwan Birsa Munda which has been declared as Janajatiya Gaurav Divas by Government of India. 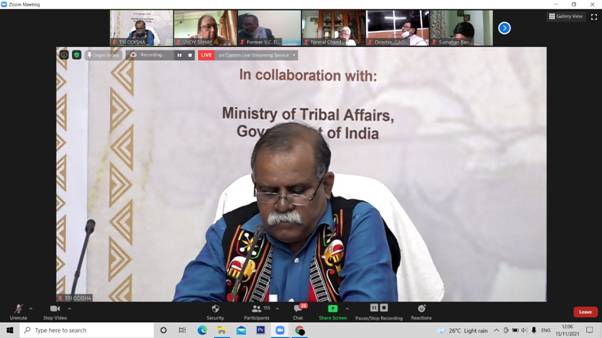 Dr. Navaljeet Kapoor, Joint Secretary Ministry of Tribal Affairs, Govt. of India stated that as a part of the year-long commemoration of 75 years of Independence, ‘Azadi Ka Amrut Mahatsov’ the Union Cabinet chaired by Prime Minister Sri Narendra Modi has announced to commemorate 15th November, the Birth Anniversary of Bhagwan Birsa Munda as ‘Janjatiya Gaurav Diwas’ to remember the contributions of tribal freedom fighters. He mentioned that the webinar will provide a platform for sharing of the great valour and courage of the tribal freedom fighters and carve out ways to protect, preserve and promote the culture and heritage of the tribal communities.

Smtt Ranjana Chopra  highlighted that this National Webinar has been organised as a mark of tribute to the great tribal freedom leader. The seminar and follow up activities will go a long way in unravelling many hidden truths and bring to light the contributions of  Bhagwan Birsa Munda.

The Webinar had technical sessions on contributions of Bhagwan Birsa Munda to India’s struggle for Independence. Prof. Vijay S Sahay, Professor (Emeritus), Former Head of Department of Anthropology, University of Allahabad gave the Keynote Address on ‘The making of Bhagwan Birsa Munda Cult: Journey of a Tribal Hero from Agrarian Movement to War of Independence’ during the inaugural session.

The webinar had participation of more than 1000 representatives from Tribal Research Institutes (TRIs), Centre of Excellences (CoEs), eminent personalities, academicians, researchers, practitioners from across the country working on tribal culture and development.