In a bid to celebrate and commemorate 75 years of Independence and our glorious cultural history through Azadi Ka Amrit Mahotsav, the Ministry of Cultureorganized the final match of the M.P. CUP POLO CHAMPIONSHIP – SIR PRATAP SINGH CUP 2021. Minister of State for Culture and External Affairs, Smt. Meenakashi Lekhi launched the final 14 GOAL match at the iconic Jaipur Polo Grounds on November 14, 2021 by throwing the first ball.The event was organized under the auspices of Indian Polo Association and supported by Just in Time Sports Foundation. Sir Pratap Singh Cup is one of India’s most historic and premier tournaments, which was instituted in 1921. It completed exact 100 years with the completion of this event.

The final match of the Sir Pratap Singh Cup 2021 was witnessed by senior Army Personnel and Ambassadors of around 40 countries including the European Union Ambassador.

It was a splendid match with three goals occurring within first few minutes of the game.

The match was followed by Trick riding display by 61 Cavalry that stunned the audience with their performance. Since Polo  originated in Manipur in the 1800s, the event was made colourfulby the cultural performances of Folk Dancers of Arunachal Pradesh, Assam, Meghalaya and Nagaland. The folk dance teams were led by Mr. L. Wangchu, MsSangeetaRabha, MsBabetPassah and MsTumchiKotha respectively. The whole cultural event was coordinated by North Central ZoneCultural Centre, Prayagraj, U.P.

The event saw a number of polo enthusiasts and eminent guests from the capital in attendance. 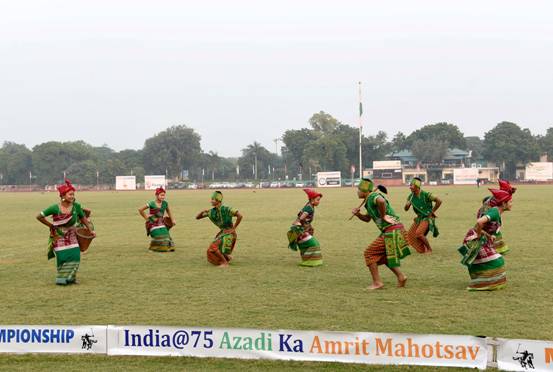 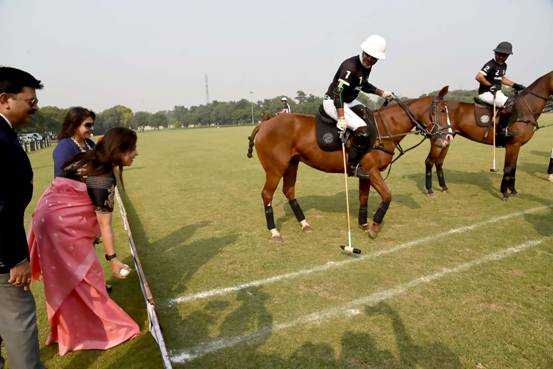 The history of the game goes back to the time when the fulcrum of polo in India was established in 1892 as the Indian Polo Association (IPA).
Maharaja Sir Pratap Singh of Jodhpur presented this cup, in 1921in commemoration of the visit of HRH The Duke of Connaught to India. It is a 14 Goal trophy. It was first played for in Delhi in 1921 and won by the Patiala Team.

Smt. Meenakashi Lekhi welcomed all the ambassadors and interacted with members of media. She said that it is our duty to celebrate the Cultural Heritage of our country and present it to the world in best way possible. The Minister  donated 50 blankets for the Polo ground workers and polo ponies from her side.

The event is in line with the Prime Minister Shri Narendra Modi Ji’s clarion call for Fit India and Khelo India, which endeavors to advance “Sports for Excellence” and emphasizes upon making fitness an integral part of our lives.

India has rich historical ties with many of the sporting traditions including Polo. India is one of the few countries in the world where this game is still preserved and practiced. Polo has also been termed as the “Heritage Sports” of India. Azadi Ka Amrit Mahotsav celebrates the Heritage of India and the event will encapsulate the cultural heritage of our sports.