A simple story told in the simplest form touches the audience: Vinothraj P.S. at IFFI52 Presser

Koozhangal, India’s Official nomination to Oscars delineates the pain and sufferings of a child and a mother, both victims of marital abuse.

“It’s a simple story told in the simplest form. And it is borrowed from my life itself. The film is based on the sufferings that my sister and her small child went through due to an alcoholic husband”, said the Director of this Tamil film Vinothraj P.S. at a media interaction held on the sidelines of 52nd IFFI today in Goa. 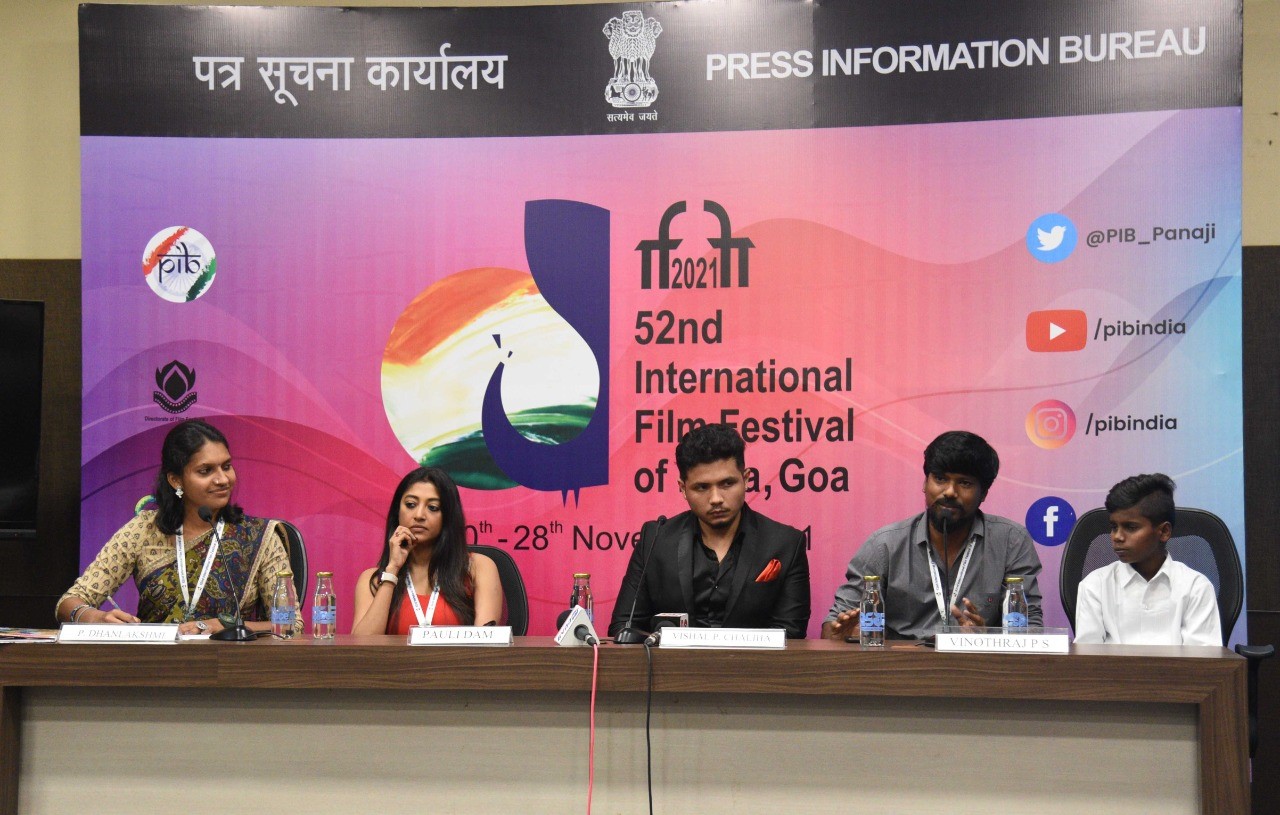 Briefing more about his debut feature film, the Director said that Koozhangal is based on the relationship between an alcoholic father and his son and presents their journey to bring back the wife who has gone off to her father’s house.

“I shot the film in my own village as both the story and the landscape were close to my heart. The landscape depicted in the film forms the third character as the behaviour of human beings are also influenced by the climate and geography where they live. The arid landscape and sweltry hot sun in which the entire plot is set are an important elements conditioning the conduct of the characters,” said Vinothraj while responding to a query on importance of the landscape in the film. Narrating his struggles while making the film, Vinothraj said that initially they didn’t have sufficient funds to go for the feature film.  “We had sent rough cut of the film to the NFDC Film Bazaar with the hope of finding a producer. It was noticed by noted Tamil director Ram, who later came forward to support us. Subsequently the film was produced by Director Vignesh Shivan and Actor Nayanthara” he added. Chellapandi, the child artist in the film was also present at the interaction and it is his debut in acting.

The film, which is also a contender for the ICFT-UNESCO Gandhi medal has been screened at various film festivals and has won accolades across the globe. About the Film: On an unbearably hot day, Ganapathy, an alcoholic wife beater, embarks on a journey to an arid hamlet located 13 kms away to bring back his wife who has deserted him. He drags along his young son Velu. Their journey is fraught with the scorching heat and deserted terrain. On reaching, he learns that his wife has left for their home. Frustrated, he gets involved in a brawl. An annoyed Velu tears up the bus ticket, forcing the father-son to walk back home under the blazing sun.

About the Director: Vinothraj P.S. began his film career by assisting National Award-winning filmmaker A. Sarkunam and director N. Ragavan, and ‘Manal Magudi’, a theatre troupe. ‘Koozhangal’ is his debut film.

Producer: Rowdy Pictures is founded by screenwriter-director Vignesh Shivan (aka Vigneshwar S.). ‘Koozhangal’ (Pebbles) is its maiden film, produced jointly with Nayanthara, a well-known actress with over 65 films to her credit in four South Indian languages.