Shri Chandrasekhar meets with Semiconductor Companies and startups during the visit

Shares PM’s vision to position India as a leader in the field of Electronics & Semiconductor Design Innovation.

Modi Government is committed to work with semiconductor companies and startups and will provide right policy framework: Shri Chandrasekhar

Union Minister of State in the Ministry of Electronics & IT, Ministry of Skill Development and Entrepreneurship, Shri Rajeev Chandrasekhar visited the CDAC Centre at Bangalore to Launch INDUS (Innovation Development Upskilling) IoT Kit – a single board IoT development platform. The CDAC developed kit, of the size of a credit card, is fitted with 6 sensors, actuators, connectivity and debugger interfaces. 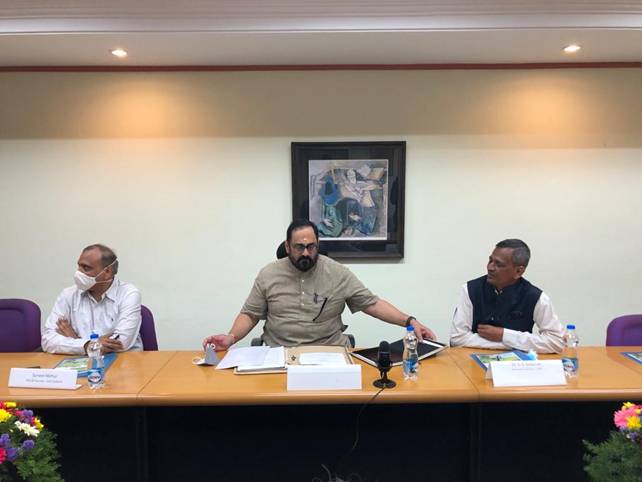 The compact and easily portable IoT Kit shall facilitate development of local and smart solutions in a range of applications including Drones.

The much awaited session at CDAC was an interaction of Top executives from leading MNCs & Start-ups with the MoS, who is a technocrat himself and known as one of the best technology minds in India. Shri Chandrasekhar has worked in Silicon Valley as a chip designer for 80486 micro-processor as well as for Pentium. Being a domain expert, he brings his knowledge, expertise and valuable experience to the two important portfolios entrusted to him by the Hon PM Sh Narendra Modi.

Addressing the gathering, Shri Chandrasekhar shared the vision of PM Modi and affirmed that “ the Narendra Modi Government is serious in its ambition in making India an Electronics and Tech leader. Ministry of Electronics and IT will play the role of a facilitator/partner and work to provide support to catalyze growth and innovation including access to market and capital.” He further added that “India has a once in a lifetime opportunity. I call it the Y2K moment for Technology and Electronics sector. The Narendra Modi Govt. is committed to work with semiconductor companies and startups and will provide the right policy framework”.

Shri Chandrasekhar has been carrying active consultations with all stakeholders regarding a suitable electronics and semiconductor design and fabrication strategy. “India has to build its own speed of innovation and not get intimidated by others. We have to work hard and build our capabilities.The Narendra Modi Govt. will be a strong facilitator” said Shri Chandrasekhar while interacting with semiconductor Cos, leaders and startups from the sector. He invited their inputs on possible strategies that can be included in the policy framework. “ The way we launched the PLI scheme, the Govt. is also working on a DLI scheme. The Government is ready to walk the extra mile. I encourage you to engage with me. I am just a phone call away”, assured Shri Chandrasekhar.

The meet was much appreciated and welcomed by the semiconductor Cos, leaders and startups. “ It was inspiring to see Hon. Minister’s vision of overall growth in electronics and semiconductor including space of product specs, design validation manufacturing and looking for Govt to acts as true catalyst. “ said Mr Santosh Kumar, President and MD, Texas instruments India.

“It was a very unique experience- almost like speaking to one of our colleagues. The clarity of thought and openness coupled with an informal atmosphere made it more like a brainstorm. With such leadership at the helm, I am sure the Indian semiconductor industry will thrive and prosper in the coming years” said Mr Parag Naik, CEO, Saankhya Labs pvt ltd.

“ I loved the thinking on need to co-develop solutions with India ecosystem partners for the new era of semiconductors as new avenues open up in various sectors, along with need for system design optimization. It very much aligns with what Intel has embarked on with its Intel foundry services based design and IP services. “ said Mr Srinivas Lingam, Vice President, Data Center and AI Group & GM, Artificial intelligence Group, Intel India.