Deputy Commissioner gave a brief outlook through a Power Point Presentation to MoS and highlighted the developmental activities in the district.

On the occasion, Union MoS said that the district has a huge potential for milk production besides having the biggest fish production source and if exploited, it can change the socio- economic condition of the local population.

The Minister appreciated the efforts put in by the UT government and the district administration to uplift the tourism sector in the district and urged the officers to work with extra zeal so as to bring Shopian on international tourist map.

On the occasion stalls were erected by some departments at Shirmal, Shopian showcasing their performance and ongoing activities. The Minister inspected all the stalls and interacted with the staff and the visitors at these stalls and distributed various certificates among the beneficiaries who had established dairy units, cow units, sheep units in their respective areas. The Minister also gave away one ambulance provided by Animal Husbandry Department Shopian, milk machines and genset, tractors, poultry and milk vans, sheep units under integrated sheep Development  scheme and sheep units under Tribal Sub Plan, shearing machines and milk transportation  vehicles as part of Azadi Ka Amrit Mahotsav. Dr. Murugan said that the youth of the district should come forward and avail of the schemes like PMMSY and other Centrally Sponsored Schemes to earn their livelihood in a decent manner. 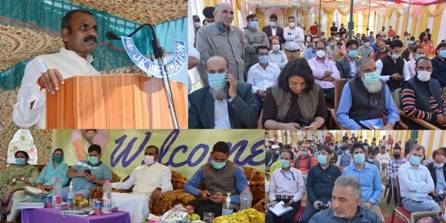 He said that under the dynamic leadership of the Prime Minister, Agriculture sector is progressing by leaps and bounds and the PM wishes to empower the farmers so that they may be able to increase and redouble their income.

He further said that the Apple Town Shopian is famous for its apple production besides a good milk production increasing on each passing day. He said that the PM’s mission is to uplift the weaker sections of the society to enable them to earn their livelihood in a better way.

Dr Murugan said that PM wants his Ministers to assess on-ground situation to take feedback from the public and stresses to ensure that the people’s lives are made comfortable and positive change is brought therein.

The Minister felicitated some youth of the district for establishing various units in their respective areas which enable them to earn their livelihood.

Dr. Murugan also released a booklet “A Guide to important prevalent sheep diseases and their treatment” that shall help the farmers to get their livestock population better treated besides other related information. 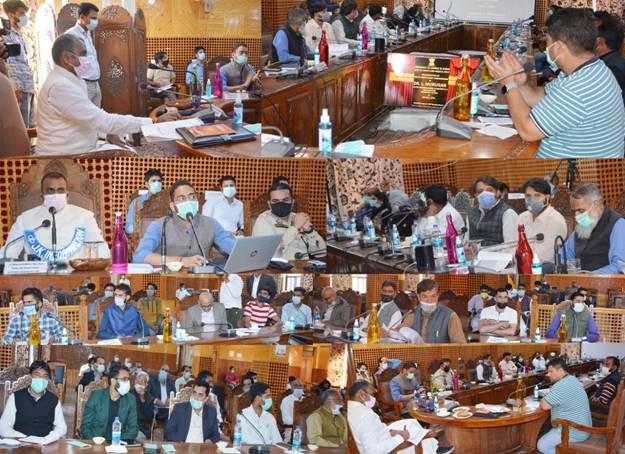 The Minister also distributed certificates of achievement among the beneficiaries of the district.

Later, several delegations called on the Minister and apprised him about various public issues and sought his intervention to resolve the issues.

The delegations raised several demands and issues with regard to development and other initiatives.

The Minister gave patient hearing to all delegations and individuals and assured them of a positive response from the government with regard to the redressal of their grievances.

Sharing the vision of the Prime Minister, Dr. Murugan said the “Sabka Sath Sabka Vikas” slogan by the Prime Minister is not merely a slogan but a mission that will ensure the betterment of socio-economic condition of weaker sections of society.

Loading...
Newer Post
Union Minister of State for Information and Broadcasting Dr. L. Murugan inaugurates RAS established under PMMSY at Awantipora
Older Post
Rampur, Uttar Pradesh, to host the next “Hunar Haat” from 16th to 25th October, 2021 as a part of series of 75 “Hunar Haat”, to be organised across the country under “Azadi Ka Amrit Mahotsav” to celebrate 75 years of India’s Independence.
Department of Empowerment of Persons with Disabilities sensitises states about Scholarship Schemes for educational empowerment of Divyangjan