“Police force is a wonderful example of the culmination of courage, restraint and hard work, on behalf of a grateful Nation, I bow to all the brave police personnel who made the supreme sacrifice for the protection of the Nation’s sovereignty on ‘Police Memorial Day’.”

Shri Nityanand Rai said that the brave soldiers of our country have given a befitting reply to expansionist actions of a neighboring country and by thwarting their efforts, have given the message that India will compromise on its sovereignty and security in any manner

Today, under the leadership of Shri Narendra Modi, India has become stronger in every way and our morale is also high

The Union Minister for Home Affairs and Minister of Cooperation, Shri Amit Shah has paid his tributes on ‘Police Memorial Day’ to police martyrs who sacrificed their lives to protect the sovereignty of the country. In a tweet, Shri Amit Shah said that the “Police force is a quintessential example of courage, restraint and diligence. On ‘Police Memorial Day’, on behalf of a grateful Nation, I bow to all the brave police personnel who made the supreme sacrifice to protect the Nation’s sovereignty. The sacrifice and dedication of every policeman inspires us to serve the Nation.

The Union Ministers of State for Home, Shri Nityanand Rai and Shri Ajay Mishra paid their tributes to martyred police personnel at the National Police Memorial in New Delhi. 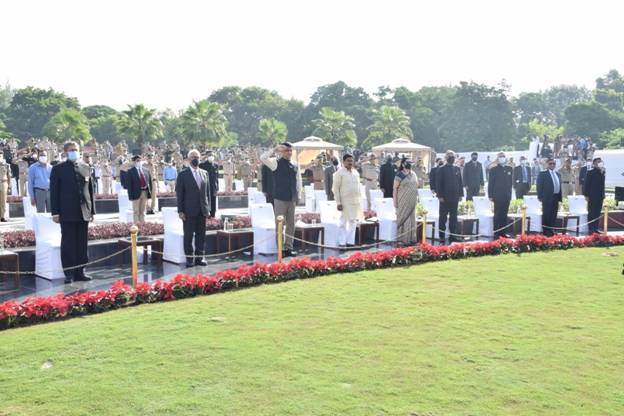 In his address, Shri Nityanand Rai said today is a heartwarming day for the police fraternity. On this day we remember the sacrifices of all those policemen who laid down their lives at the altar of duty. He said that it is a day not only for the police fraternity to pay their tributes, but also for the entire Nation to pay its tributes. The Union Minister of State for Home said that on behalf of Prime Minister Shri Narendra Modi, Home Minister Shri Amit Shah, the Union Cabinet and a grateful Nation, I pay homage to all the policemen who made the supreme sacrifice for the Nation. I also bow to their families who are equally deserving of respect and admiration.

Shri Nityanand Rai said that on this day on October 21, 1959, the Chinese army killed 10 police personnel by attacking a police patrol in the Hot Spring area of ​​Eastern Ladakh. Since the year 1960, on this day, Police Commemoration Day is celebrated across the country in memory of the supreme sacrifice of the policemen. The Union Minister of State for Home said that our brave soldiers have given a befitting reply to the expansionist actions of a neighboring country and by thwarting their efforts, have given a message that India will not compromise on its sovereignty and security in any manner. Shri Rai said that today under the leadership of Shri Narendra Modi, India has become stronger in every way and our morale is also high. The ITBP has an important contribution in this regard. In such a situation, the entire nation is proud of those personnel of ITBP who have contributed to the security of the nation by standing shoulder to shoulder with our Armed Forces. 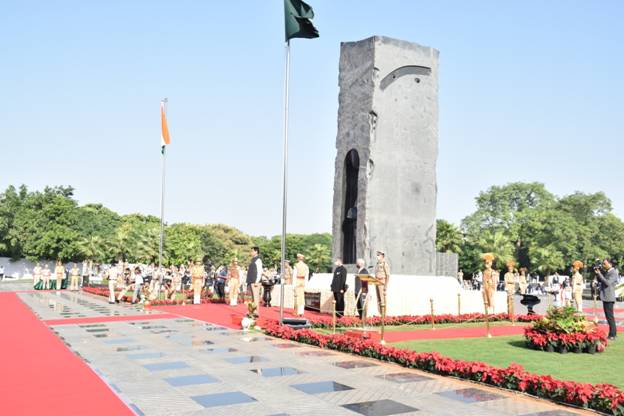 The Union Minister of State for Home said that whenever we faced challenges regarding internal or external security, we took strong steps and acted with success. Sometimes anti-national forces try to take advantage of these situations to create instability in the country, but based on the strength of your bravery, courage and determination, we want to assure the country that such nefarious intentions will never succeed. Shri Nityanand Rai said that today many more changes are being seen at the global level. You have played an important role not only in security related matters, but also in serious natural calamities caused by Climate Change. During various natural calamities, it is police personnel and the National Disaster Response Force (NDRF) who have extended the first hand of aid. We need to strengthen our capabilities to deal with such situations.

Shri Nityanand Rai said that globally, another such calamity was the COVID-19 pandemic which engulfed the entire world. As the the Home Minister Shri Amit Shah said last year, along with medical personnel, policemen also fought against COVID-19 and played an important role in preventing infection and protecting the lives of the common people. More than 3.5 lakh policemen fell victim to this disease and 2,458 personnel also lost their lives. As per the special instructions of the Prime Minister, this year’s parade is dedicated to the policemen who played an important role during the pandemic. The Union Minister of State for Home said that the Government of India is committed to equipping all police forces of the states and the Central Armed Police Forces (CAPF) with new equipment and the modernization fund provided by the Center to the states plays an important role in this direction. The Ayushman CAPF Health Scheme of the Government of India for CAPF Jawans was launched by the Home Minister in January 2021 in Guwahati. With this, CAPF personnel and their families will receive health security to a great extent. We are urging state police forces to adopt this scheme for their personnel and their families. He said that it is a matter of happiness that 12 states have started the process of implementing this scheme in full or with some partial changes. Shri Rai said that many efforts are also being made to tackle the problem of mental stress of the police personnel. The nature of work and the long duration of duty adversely affects the mental health of many police personnel. On this problem, the Modi government has begun measures with special attention, so that such cases can be handled with the help of experts. 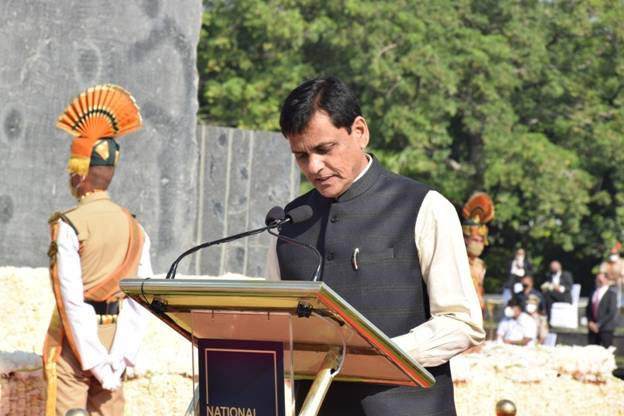 Shri Nityanand Rai said that today we all stand at a special place. As the Home Minister said last year, on the special orders of the Prime Minister, this Government has tried to ensure that a suitable memorial is constructed at a prominent place in Delhi in honour of police personnel who made the supreme sacrifice in the line of duty. Today this memorial site is ready and we are also trying to ensure that it becomes a place of pilgrimage for all police personnel. At the same time, we want this place to be popular among all countrymen as a place of pilgrimage. He said that the role of the police in people’s daily lives, despite being important, lags behind. Very few people in the country know that to ensure safe daily activities for the common man, policemen boldly face many troubles. For the peace and security of the country, 377 policemen have laid down their lives in the last one year and since Independence, 35,780 police personnel have sacrificed their lives.

The Union Minister of State for Home said that the Ministry of Home Affairs has requested all State Police Forces to urge their Chief Ministers and Police Chiefs to visit the National Police Memorial. School children have especially been motivated to visit the memorial. He said that it is a matter of satisfaction that about 4 lakh school children have visited the memorial and have taken inspiration from the sacrifices of the brave police personnel. Not only this, many foreign delegates have also visited this memorial and they learned that India maintains the honour of the martyrdom of its police personnel in its heart. Shri Rai said that this year as we celebrate the 75th anniversary of our independence in the form of the “Amrit Mahotsav”, this “National Police Memorial” will witness many special programmes. He said that over the next nine days, several programmes would also be organized here to educate personnel of police organizations and their families about the role of various forces and their sacrifices in the defense of the country.

Shri Nityanand Rai said that from this memorial, I once again give an assure from my side and on behalf of the government that we will always be ready to protect the interests of every police personnel on duty and their families. Along with this, every effort will be made to honour police personnel who made the supreme sacrifice and take full care of their families. I once again pay homage to all the martyrs who laid down their lives for the country.