Union Minister for Minority Affairs Shri Mukhtar Abbas Naqvi has said “Vishwakarma Vatika” will be set up at “Hunar Haats”, to promote and preserve precious traditional skills of artisans and craftsmen.

Union Minister for Minority Affairs Shri Mukhtar Abbas Naqvi has said “Vishwakarma Vatika” will be set up at “Hunar Haats”, to promote and preserve precious traditional skills of artisans and craftsmen.

First such “Vishwakarma Vatika” has been set up in the next “Hunar Haat” to be held in Rampur, Uttar Pradesh from 16th October, 2021: Naqvi

Proficient craftsmen and artisans from across the country will give live demonstrations of hundreds of India’s traditional art and craft at one place in these “Vishwakarma Vatika”: Naqvi

“Vishwakarma Vatika” will be set up at “Hunar Haats”, to promote and preserve precious traditional skills of artisans and craftsmen where they will also be displaying live how India’s traditional exquisite and elegant indigenous handmade products are made.

Talking to media persons here today, Union Minister for Minority Affairs Shri Mukhtar Abbas Naqvi said that the first such “Vishwakarma Vatika”, which has been set up in “Hunar Haat” at Rampur, Uttar Pradesh to protect, preserve and promote India’s glorious legacy of centuries-old skills and craftsmanship, will be inaugurated by Union Minister for Education and Skill Development and Entrepreneurship Shri Dharmendra Pradhan on 16th October, 2021 in the august presence of Union Minister of State for Parliamentary Affairs and Culture Shri Arjun Ram Meghwal. 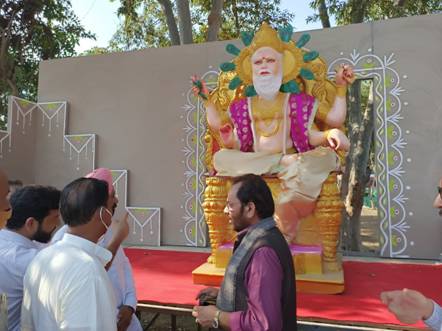 Proficient craftsmen, sculptors, stonemasons, blacksmiths, carpenters, potter and other artisans from across the country, will give live demonstrations of hundreds of India’s traditional art and craft at one place in these “Vishwakarma Vatika”.

Shri Modi had said that, ‘’Look around yourself; be it an ironsmith, a potter, a carpenter, an electrician, a house painter, a sanitation worker, or someone who repairs mobile-laptops. All of them are known only because of their skill. In modern form, all of them are also Vishwakarma.’’

Shri Modi had said that, “But during the long period of slavery and subjugation, the feeling that gave such respect to skill gradually faded into oblivion. The thinking became such that skill based tasks were considered inferior. And now see, today, the whole world is emphasizing the most on skill. We have to respect the talent, we have to work hard to be skilled. We should be proud to be skilled”.

Talking to the media persons Shri Naqvi said that the Union Ministry for Minority Affairs is organising “Hunar Haat” in Rampur,  Uttar Pradesh from 16th to 25th October, 2021 as a part of series of 75 “Hunar Haat”, to be organised across the country under “Azadi Ka Amrit Mahotsav” to celebrate 75 years of India’s Independence. The Minister said that besides “Vocal for Local”, the upcoming “Hunar Haats” will also be based on the theme of “Best from Waste”. Exquisite products made from used and discarded items in households such as plastic, paper, ply, wood, glass, ceramic, jute, cotton, wool as well as banana stems, sugarcane pulp, paddy and wheat straw-stems, husk, Tur, rubber, iron, brass,  etc will be available in “Hunar Haat” for sale and display.

He said that the people will also enjoy traditional food from almost every corner of the country under one roof at “Bawarchikhana” section in the “Hunar Haat”. The people will enjoy traditional foods from the regions and states such as Awadh, Rampur, Hyderabad, Maharashtra, Goa, Bihar, Rajasthan, North-East, Odisha, West Bengal, Madhya Pradesh, New Delhi, Haryana, Punjab, Mysuru etc.

He stated that “Hunar Haat” has become a “credible platform” to strengthen Prime Minister Shri Narendra Modi’s call for “Swadeshi-Swavlamban” and “Vocal for Local” and providing market to indigenous products of traditional artisans and craftsmen.