Union Minister of Tourism, Culture &DoNER Shri G. Kishan Reddy interacted with the officials of Ministry of Tourism of Culture of Southern zone on the second day of conference of Tourism and Culture Ministers of the Southern Region in Bengaluru, Karnataka. The conference was inaugurated on October 28,2021 by Union Minister of Tourism, Culture and DONER Shri G. Kishan Reddy. The inaugural function was attended by the Minister of State for Tourism, Govt, of India, Shri Ajay Bhatt, Ministers of tourism and culture from Karnataka,Tamil Nadu,Andhra Pradesh, Puducherry, Senior Officials from various Central Ministries, State Governments, Union Territory Administrations (UTs), Media and industry stakeholders. The Ministry of Tourism is continuously working on different verticals like infrastructure development, promotion and publicity, skill development etc. to facilitate the development of overall tourism in the region. 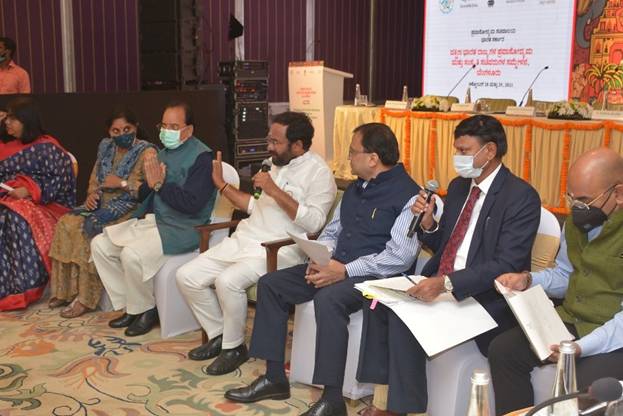 On second day Shri G Kishan Reddy discussed various challenges faced by the sector & measures to boost tourism while promoting the culture of each state in the region. After that presentatíonswere made by various Ministries including M/o Tourism, M/o Shipping, M/o Environment, Forest and Climate Change, NEGD, to apprise the participants about the various projects and initiatives being taken by the Central Government for the development of the region.

Sh.M. Srinivas Rao, Minister of Tourism, Telegu Language and Culture, Government of Andhra Pradesh spoke on the tourism opportunities in the State. 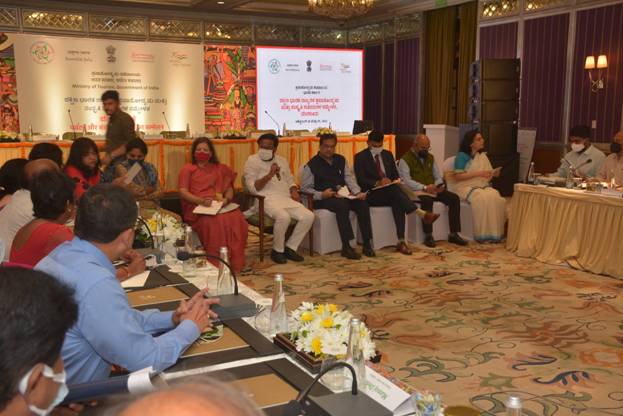 Ministry of Tourism promotes India as a holistic destination including southern region States & UTs on various platforms in Digital, Print and social media. Since April 2020, under DekhoApnaDesh campaign, the Ministry of Tourism has been conducting webinars on various tourism products including dedicated webinars on States & UTs of Southern Region. The connectivity by air, train and road to various destinations in the region is excellent and sought-after destinations by many.  During the sessions, discussion on Heritage & Cultural Tourism initiatives, Skill development, potentiality of Cruise Tourism in the Southern Region etc. were held.

The Ministry of Tourism has concentrated on the issues of Skill development in tourism sector, creating a pool of well trained and professional Tourist Facilitators is essential for providing world class services to the tourists, promotion and marketing for creating awareness about the destination in the domestic and international markets. As the domestic tourism is showing a great surge in the last few months and as the borders will be open for international tourists soon, building confidence and trust of the tourists is extremely important. Ministry of Tourism undertakes development of infrastructure at tourist destinations across the country under its infrastructure development schemes viz. Swadesh Darshan (SD) and PRASHAD (National Mission on Pilgrimage Rejuvenation and Spiritual, Heritage Augmentation Drive).