Concession Agreement Signed for Development of STP in Bhagalpur, Bihar under NMCG

Ministry of Jal Shakti Concession Agreement Signed for Development of STP in Bhagalpur, Bihar under NMCGProject Worth Rs. 385.09 Crore Aims to Eli

Concession Agreement Signed for Development of STP in Bhagalpur, Bihar under NMCG

The project aims to eliminate flow of untreated sewage from Bhagalpur city into the River Ganga thereby reducing pollution load in the river. NMCG approved the project for construction of Sewage Treatment Plants (STPs) of total capacity of 45 MLD, among other works such as developing Interception & Diversion (I&D) structures, I&D network laying, Sewage Pumping Stations including Operation and Maintenance for 15 years etc. This project also aims to take care of the existing sewerage problems in the town and the resultant sewage pollution in the river Ganga. 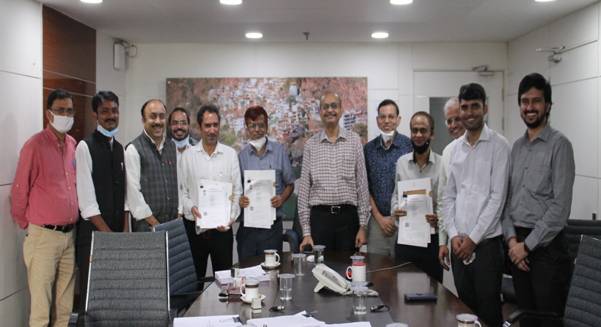 Bhagalpur is a municipal corporation town situated on the plains of the Ganga River basin at the height of 141 feet above sea level in Bihar, India and is the second largest city after Patna in Bihar. Apart from Patna, under the Namami Gange programme, important towns in the Bhagalpur district namely, Bhagalpur, Sultanganj, Kahalgaon and Naugachia have also got STP projects. The river stretch of river Ganga from Sultanganj to Kahalgaon falls under Vikramshila Gangetic Dolphin Sanctuary with a total length of 60 km. The pollution abatement of river Ganga in this stretch is therefore very significant in order to maintain the habitat of the Gangetic Dolphin and other aquatic animals. This will ensure to maintain of the rich biodiversity of the region. This project will abate the pollution generated from the city with significant and stringent performance standard to ensure the habitat of the Gangetic Dolphin is no longer polluted.