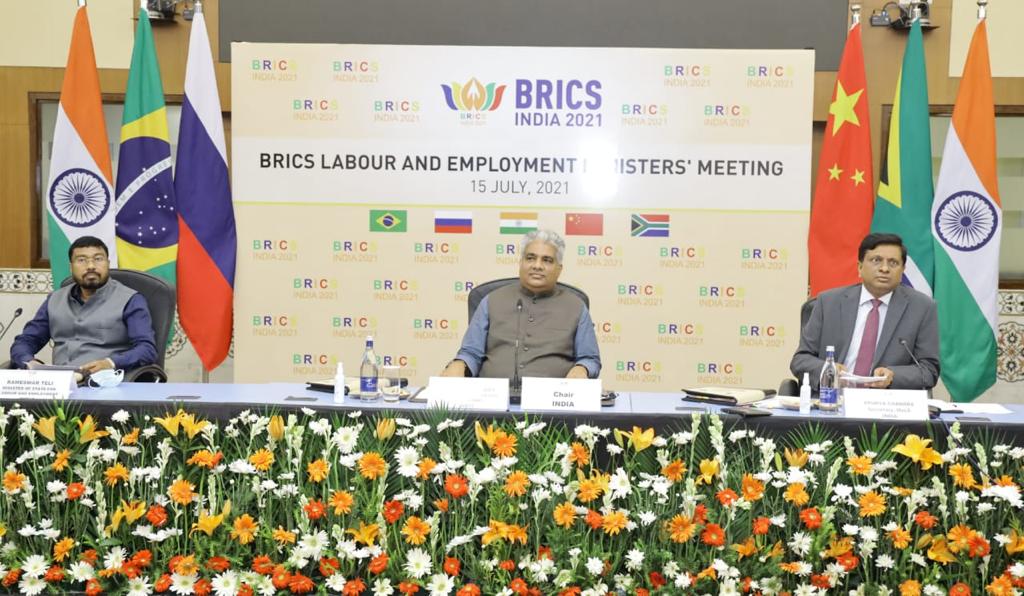 The significant aspect of the meeting was the adoption of the BRICS Labour & Employment Ministers’ Declaration. The MinisterialDeclaration recognized that the COVID-19 pandemic has negatively impacted the efforts made to address unemployment, decent work deficits and inequality. It also illustrates the strong determination of BRICS Member countries to recover with stronger national economies, inclusive labour markets and social protection systems.

In his welcome address, ShriBhupenderYadav stressed onenhancing the intra-BRICS solidarity and promoting sustained, inclusive, full and productive employment and decent work for all. He highlighted thepath breaking reforms by Government of Indiain amalgamation, simplification and codification of its labour laws into four labour codes, namely “The Code on Wages 2019”, “The Code on Social Security 2020”, “The Industrial Relations Code 2020” and “The Occupational Safety, Health and Working Conditions Code 2020”. The new Labour Codes provide integrated pathways towards robust formalization of the labour market, increasing participation of women in the labour force and enhancing the role of gig and platform workers in the labour market. The Minister further emphasised on need for signing of Social Security agreements amongst BRICS nations to promote welfare of the international migrant workers.

On the issue of “Promoting Social Security Agreements amongst BRICS Nations”, BRICS Ministers have resolved to carry out exchange of information among BRICS countries on employment and social security for cross-border labour flows and initiate social security agreements between BRICS nations within a reasonable timeframe.On the issue of “Formalisation of Labour Markets”, Member countries reiterated their commitment to enhance the transition from informality to formality as a means towards improving living and working conditions, productivity and job growth and strengthening efforts to reduce poverty through access to quality employment and social protection. BRICS countries also agreed that the sustained participation of women in the labour market and strategies for the promotion of women participation in remunerative, productive and decent work are top priorities in the national policy agenda.To enhance the role of gig and platform workers in the labour market, the BRICS Ministers supported the development of the digital economy, including digital delivery of services, while acknowledging the role of digital platforms in providing resilience to national economies in the face of crisis such as COVID-19.