Climate researchers have discovered that excess irrigation over northern India shifts the September monsoon rainfall towards the north-western part of the subcontinent increases widespread weather extremes over Central India. These meteorological hazards expose the vulnerable farmers and their crops to risks of failure.

The study which establishes that monsoon precipitation is sensitive to the choice of irrigation practices in South Asia can help plan agricultural practices in this region.

South Asia is one of the most heavily irrigated regions of the world, largely using groundwater, and its major summer crop is paddy which is cultivated in water flooded fields. Hence it was pertinent to study how such practices can influence the monsoons which form the fulcrum of this agro-based economy.

Subimal Ghosh, Professor in Department of Civil Engineering and Convener at Interdisciplinary Programme in Climate Studies (IDPCS), a Centre of Excellence at IIT Bombay supported by the Department of Science and Technology and his climate group, investigated the impact of agricultural water use on the Indian Summer Monsoon using a climate model. 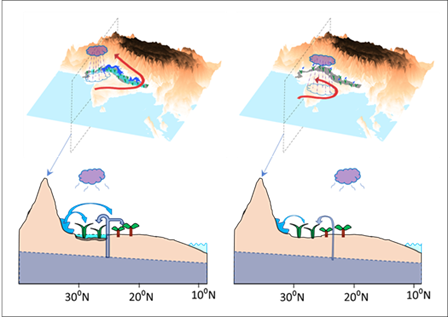 Fig A. Increase in irrigation leads to increase in evapotranspiration and consequent increase in extreme rainfall events (derived from Devanand et al. 2019)

The research published in the journal ‘Geophysical Research Letters’ recently showed that monsoon precipitation is sensitive to the choice of irrigation practices in South Asia. In another study, Prof. Subhankar Karmakar from IDPCS, IIT Bombay, and his research group identified for the first time that risks for rice and wheat have increased in the recent decade, with wheat at a two-fold higher magnitude than rice. The study followed the Assessment Report 5 of IPCC definition to quantify ‘Risk’ and has been published in ‘Environmental Research Letters.’

Increasing crop risk is predominantly driven by the decreasing number of farmers, and the wheat risk is also attributed to increasing minimum temperatures during the crop growing season. This study provided compelling evidence indicating that the hydro-climatic hazards related to precipitation extremes and drought are specifically alarmingly increasing the crops risk as compared to temperature extremes.

Another finding obtained from this study was extreme rainfall in recent decades in Central India has been increasing, and this is also caused by an increase in irrigation and consequent increase in evapotranspiration (the sum of evaporation from the land surface plus transpiration from plants). 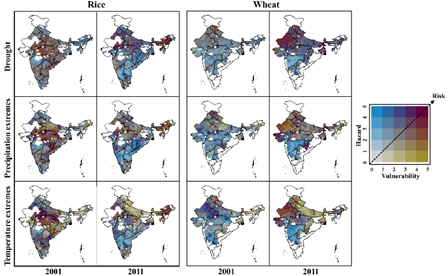 Fig B: A representative agricultural risk map to drought, precipitation extremes, and temperature extremes for rice and wheat in 2001 & 2011. (derived from Sharma et al., 2020)

The findings on irrigation-monsoon feedbacks and the agri-cartographic products will directly benefit the National Initiative on Climate Resilient Agriculture by the GoI.