A Memorandum of Understanding (MoU) has been signed for execution of 679 MW Lower Arun Hydro Electric Project in Nepal between Satluj Jal Vidyut Nigam (SJVN) Central Public Sector Enterprise under Ministry of Power, Government of India & Investment Board of Nepal (IBN) in Kathmandu Nepal. With the active support of Ministry of Power, Govt. of India, SJVN won the project through International Competitive Bidding defeating other companies of the neighbouring countries.

During the visit of Shri R K Singh, Union Cabinet Minister of Power and New and Renewable Energy to Nepal in September 2019, he convinced the Prime Minister of Nepal to allot SJVN, the Lower Arun HEP (679 MW), a downstream development of Arun-3 HEP based on the capabilities, proven track record of SJVN in hydro sector as also  shown by the progress of construction activities of Arun 3 HEP in Nepal. 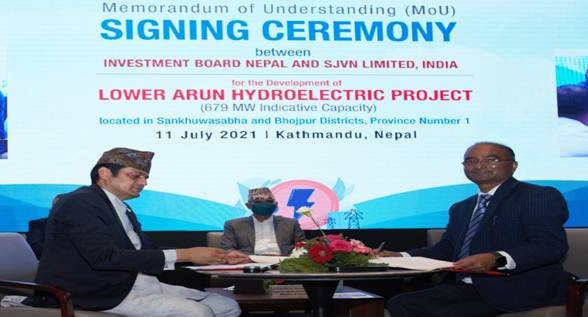 India is also endeavouring creation of a common pool for regional power grid and energy market in the neighbouring countries for regional peace and improvement of optimum utilisation of generation assets under the visionary leadership of Prime Minister Shri Narendra Modi.

The Lower Arun Hydro Electric Project is located in Sankhuwasabha and Bhojpur Districts of Nepal. The project will not have any reservoir or dam and will be a tail race development of 900 MW Arun3 HEP. The project will have four francis type turbines. On completion the Project will generate 2970 million units of electricity per annum. It is scheduled to be completed in four years after commencement of construction activities and  has been allocated to SJVN for 25 years on Build Own Operate Transfer basis.

This is the second project awarded to SJVN in Nepal, the first one being the 900 MW Arun 3 Hydro Electric Project in Sankhuwasabha District. Arun-3 Project is being implemented through wholly owned subsidiary company of SJVN i.e. SJVN Arun-3 Power Development Company Limited (SAPDC) incorporated in Nepal. SJVN Limited was allotted even this project through international competitive bidding by Government of Nepal on Build Own Operate and Transfer (BOOT) Basis with a concession period of 25 years excluding 5 years of construction time.

The Foundation Stone of the Arun 3 project was jointly laid by Prime Minister of India Shri Narendra Modi  and  Prime Minister of Nepal Shri K P Sharma Oli at Kathmandu on May 11th 2018. Arun 3 HEP is the largest project in Nepal and also the largest investment of around INR 7000 Crores by India in Nepal. The commissioning of this project will go a long way in fostering friendship between the two neighbours and also lead to accelerated development and economic revival of Nepal. Project construction works are going on in full swing. The power from this project will be evacuated to India through the 400 kV double circuit transmission line to Sitamarhi in Bihar, India, also being constructed by SAPDC.

Read this release in: Tamil
OI-News 3628

Loading...
Newer Post
Indian stem cell & developmental biologist part of WHO advisory committee on human genome editing
Older Post
Quick Estimates of Index of Industrial Production and Use-Based Index for the Month of May, 2021 (Base 2011-12=100)
Remarks by President Biden and Vice President Harris in Virtual Meeting with Governors on Wildfires