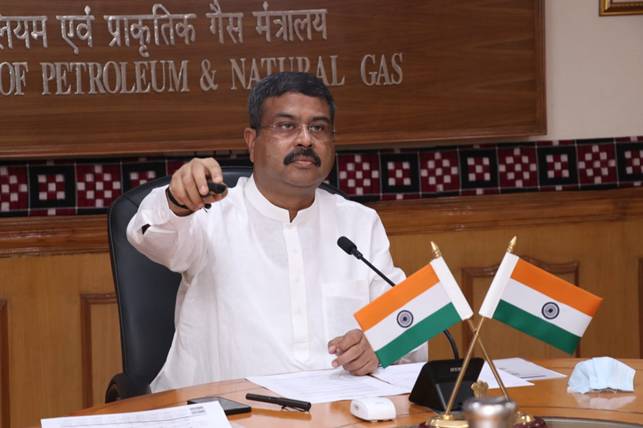 Union Minister of Petroleum and Natural Gas & Steel Shri Dharmendra Pradhan today dedicated to the nation, a 114 bedded COVID Care Facility in Bhilai Steel Plant (BSP) of SAIL in Chhattisgarh. This hospital is equipped with gaseous oxygen and has been set up after laying a pipeline of 1.5 Km for supply of gaseous oxygen from the plant. This is the first phase of this project which aims to scale up to reach a total of 500 oxygenated beds in the subsequent two more phases. The centre has a facility of double oxygen backup supply. Apart from gaseous oxygen as the main source, there is also provision of back-up of stored Liquid Medical Oxygen.The facility is also equipped with necessary internet & telecom services to facilitate IT requirements and remote consultancy. Speaking on the occasion, Minister Pradhan said that Hon’ble Prime Minister ShriNarendra Modi has given the mantra of “Jahan Bimaar, Wahi Upchaar” and setting up hospitals near the source of gaseous oxygen and today’s inauguration is another step towards that vision.

Lauding the role of Bhilai Steel Plant during COVID times, Shri Pradhan said that its hospital has played an important role in treating patients during the second wave of the COVID-19 and also played an important role in supplying liquid medical oxygen in the country and meeting the surge in demand of LMO.The second wave of Covid-19 led to sudden and sharp surge in Oxygen demand. The demand of the Liquid Medical Oxygen was about 1300 MT per day in early April which went upto 10 thousand MT by mid-May. The load was managed by taking several steps, and the Steel sector played the prime role in this. The steel plants rose to the occasion and met the nation’s requirement even at the cost of reducing their production. 2.8 lakh MT of LMO was supplied out of which almost 2 lakh has been provided by Steel and Petroleum sectors.

About vaccination, Shri Pradhan said that Hon. Prime Minister Shri Narendra Modi has laid down the roadmap for vaccination. Shri Pradhan assured that the Government of India and SAIL stands by Chhattisgarh and will do everything possible to maximise vaccination for the people of the state. He called upon corporations in Chhattisgarh and the state government to join hands to maximise vaccination in the shortest possible time. He assured that learning from the recent experience, the COVID Care Facility in BSP will be ready for any future surge. It will continue to function as long the need is felt. The Minister also said that SAIL is conscious of its responsibility as a corporate citizen, and will soon decide on the demand for compassionate appointments for the families affected by Covid-19.

Minister of State for Steel Shri Faggan Singh Kulaste spoke about various measures being taken by the steel sector during the COVID-19 pandemic.

SAIL-Bhilai Steel Plant’s JLN Hospital & Research Centre has played an important role in treating COVID patients of the region. As many as 8000 Covid patients have been treated in this hospital in Bhilai so far. With the recent rise in number of patients, the number of beds with oxygen facility has been increased to 594, including 560 beds with piped oxygen supply. Besides in-patient treatment, around 31,000 persons have been tested for COVID at four centres including one inside the Plant. A special Flu-Clinic was set up where more than 35,000 Covid-suspect persons were given medical guidance.

Loading...
Newer Post
Union Education Minister approves release of Report of All India Survey on Higher Education (AISHE) 2019-20
Older Post
PM condoles loss of lives due to collapse of a structure in Malad West, Mumbai
Appointment of António Guterres as UN Secretary-General for a Second Term