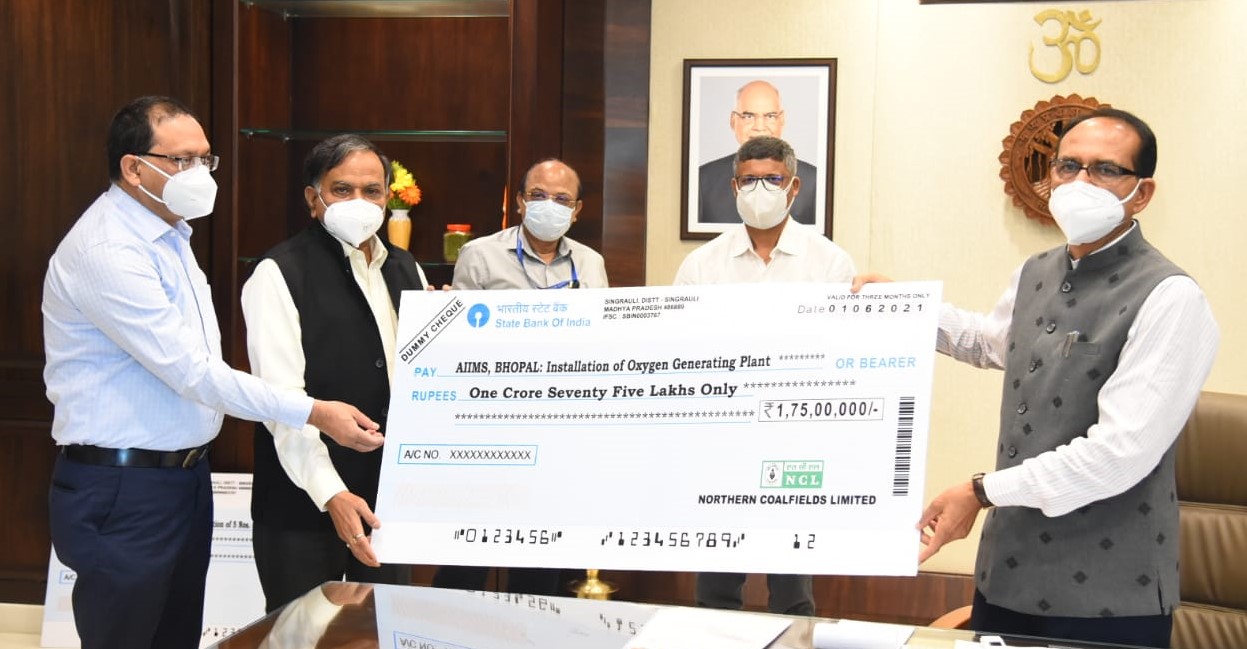 NCL contributes Rs. 10 Crore to MP Government to support its fight against COVID

Ministry of Coal NCL contributes Rs. 10 Crore to MP Government to support its fight against COVIDNCL provides assistance of Rs. 1.75 crores to set

NCL contributes Rs. 10 Crore to MP Government to support its fight against COVID

NCL provides assistance of Rs. 1.75 crores to set up an oxygen generating plant at AIIMS, Bhopal

Northern Coalfields Limited (NCL) has contributed Rs. 10 Crore to the state of Madhya Pradesh to set up 5 oxygen plants in different medical colleges of the state under its Corporate Social Responsibility (CSR). CMD of NCL Shri Prabhat Kumar Sinha today handed over a Cheque  of  the said amount to the Chief Minister of Madhya Pradesh, Shri Shivraj Singh Chouhan.  This will assist the state to strengthen the fight against COVID-19.

CMD Shri Sinha apprised the Chief Minister about NCL and its operation in the state. He briefed about the CSR activities of the company in the Singrauli Region and the Major Project being undertaken for the inclusive development of the region. CMD also detailed the measures taken by NCL to curb the COVID19 pandemic. The Chief Minister appreciated the contribution of NCL in the energy security of the Nation and NCL’s effort in fighting the COVID pandemic in induced testing time. He also assured his support to NCL.

The amount Rs 10 Crore has been given to the Department of Public Health and Family welfare of the MP Government towards upgrading healthcare infrastructure in light of the COVID pandemic. Along with this, the company has also given an assistance of Rs. 1.75 crores to set up an oxygen generating plant at AIIMS, Bhopal for the treatment of patients, under its CSR initiatives.

NCL is also assisting Singrauli district administration against COVID for up-gradation of medical infrastructure such as oxygen plants and necessary arrangements with Rs. 7 Crore. Previously NCL had also contributed a sum of ₹ 20 Crore to the Madhya Pradesh government to fight against COVID-19 pandemic.

NCL has also provided essential facilities to more than 1 lakh people living in the villages of the Singrauli region, such as sanitization of public places, distribution of ration kits, masks, sanitizers, medical kits, and medical equipment, etc. Strong health infrastructure in a record time for the treatment of COVID patients was developed to serve the employees and locals.

NCL is a Miniratna company of the Government of India, Mining more than 115 MT of coal annually from its 10 highly mechanized coal mines in which 6 opencast mines operating in MP produce about 85% of the company’s coal.  NCL contributes about 15 percent in the total coal production, which thereby generates about 10 percent of the total electricity of the country. Attack on Hospital in Afrin, Syria