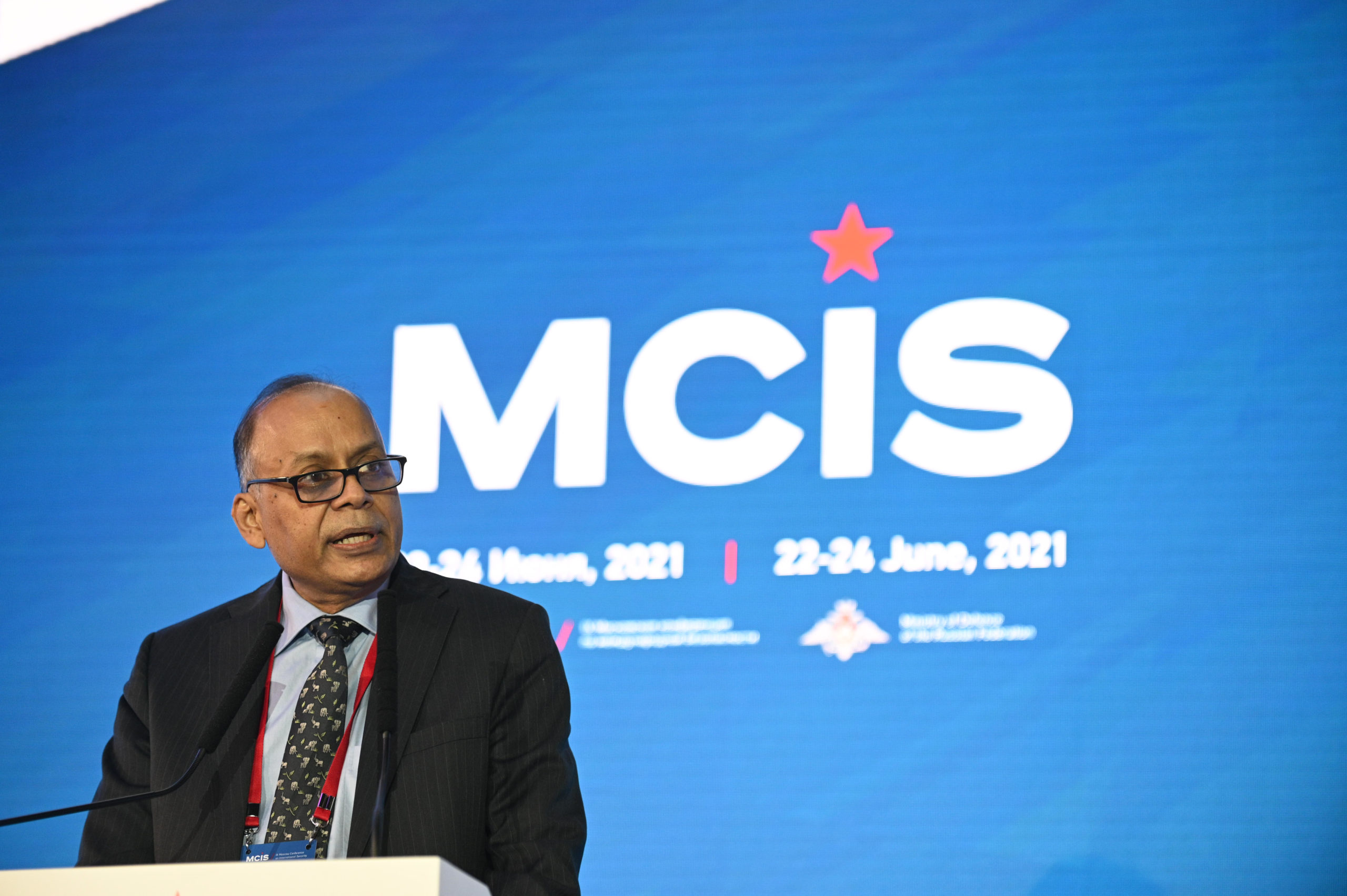 “Active collaborations, research partnerships and leveraging each other’s strengths are the ways ahead to fight pandemics like COVID-19,” said Defence Secretary Dr Ajay Kumar in his address at the plenary session of the 9th Moscow Conference on International Security on the topic ‘Role of Military Agencies in fighting against COVID-19’, in Moscow, Russia on June 23, 2021. Defence Ministers of Kazakhstan, Mongolia, Zimbabwe, Sudan and UN Under Secretary General for Peacekeeping among others participated in the session.

Noting that global challenges like COVID-19 make no distinction among nations, the Defence Secretary stressed on bolstering infrastructure and capabilities for global response to prevent eruption of such diseases in future. He urged the international community to focus on proactive vaccinations and keep ahead of the curve to deal with COVID-19 pandemic. “Emerging technologies must be leveraged. For example, Artificial Intelligence can be put to use for infection prediction, data analysis and COVID diagnostics with greater accuracy,” he suggested.

On the India-Russia defence relations, Dr Ajay Kumar termed the ties as an integral pillar of the Special & Privileged Strategic Partnership between the two countries. He welcomed Russia’s willingness to actively engage in India’s ‘Make in India’ program for co-development and production of high technology defence items. He looked forward to the visit of Russian Defence Minister General Sergei Shoigu to India later this year for the next meeting of the India-Russia Inter-Governmental Commission on Military & Military-Technical Cooperation.

Highlighting India’s assistance to other countries in fighting the pandemic, the Defence Secretary said “India not only fought its own battle, India also helped and continues to help friendly foreign nations to withstand COVID-19.” Even at a time of great medical and economic stress, India supported others unhesitatingly, inspired by its ancient belief of Vasudhaiva Kutumbakam – ‘the world is one family’, he added.

Right when the first wave of the pandemic had struck, Prime Minister Shri Narendra Modi called upon the leaders of the South Asian Association for Regional Cooperation (SAARC) to combat COVID-19 together in the region.

The Defence Secretary highlighted India’s support to friendly nations by deploying Rapid Response Medical Teams to provide medical assistance to those in need. Medical supplies of various kinds were sent to 150 countries.  Through the spring and summer of 2020, India was the main supplier of basic medicine of that time – paracetamol and hydroxychloroquine, to over 120 countries, he said. On the ‘Vande Bharat’ Mission, he said it was the largest logistical exercise of its kind ever undertaken that enabled movement by air and sea of seven million people, including evacuating over 120,000 foreigners from 120 nations stranded in India, when most of the world’s airlines were closed.

Dr Ajay Kumar said today India is one of the largest eco-systems for the pandemic support industry, including the second largest producer of PPE kits. He said the pandemic triggered innovations across the domain of medical demands and the industry developed a variety of COVID related medicines, vaccines, ventilators, equipment, diagnostic kits and other supplies which have been supplied to nearly 150 countries.

The Defence Secretary reiterated the Government’s resolve to make vaccines and drugs effective and affordable for all, terming vaccination as the mainstay of the country’s response to the pandemic. He also stated that as on date, India’s contribution of 66 million doses of vaccine to other countries is the largest from any country. Dr Ajay Kumar described Russia as a front ranking fighter against COVID-19 and hoped that the Russian vaccine, Sputnik V will play a significant role in mitigating the pandemic in India. “Mass production of the vaccine in India is expected to commence soon. A total of about 900 million doses of Sputnik V are expected to be produced in India, accounting for 70% of its global production,” he said.

Elaborating on the efforts made by Ministry of Defence & the Armed Forces in augmenting medical facilities and providing aid to civil authorities in India & abroad in fight against COVID-19, the Defence Secretary lauded the contribution of Defence Research and Development Organisation (DRDO) and the three Services as well as Directorate General Armed Forces Medical Services (DG AFMS). He said DRDO figured out the most promising use of 2-deoxy-D-glucose (2-DG) which is effective against COVID-19. He added that DRDO established COVID Care facilities in a matter of days and embarked to set up 500 medical oxygen plants using the Medical Oxygen Plant technology developed for on‐board oxygen generation on Light Combat Aircraft (LCA) Tejas.

Commending the Armed Forces for providing assistance to the civil authorities, Dr Ajay Kumar stated that within days of the first wave, Army set up a number of isolation facilities and ran special military trains to transport medical supplies. On the efforts during the second wave, he said Indian Navy sent huge number of medical supplies and teams to Indian Ocean Region, while 11 Naval ships ferried in over 1,500 metric tonnes of emergency Liquid Medical Oxygen. Indian Air Force carried out approximately 1,800 sorties and lifted 15,000 metric tonnes of essential medical supplies from within the country and abroad, he added. The Defence Secretary complimented AFMS for deploying additional doctors, including retired doctors and paramedics, and manning the hospitals 24×7 for Service personnel as well as civilians.

The Ministry of Defence of the Russian Federation is holding the 9th Moscow Conference on International Security between June 22-24, 2021. The conference, held annually since 2012, is an important security dialogue. 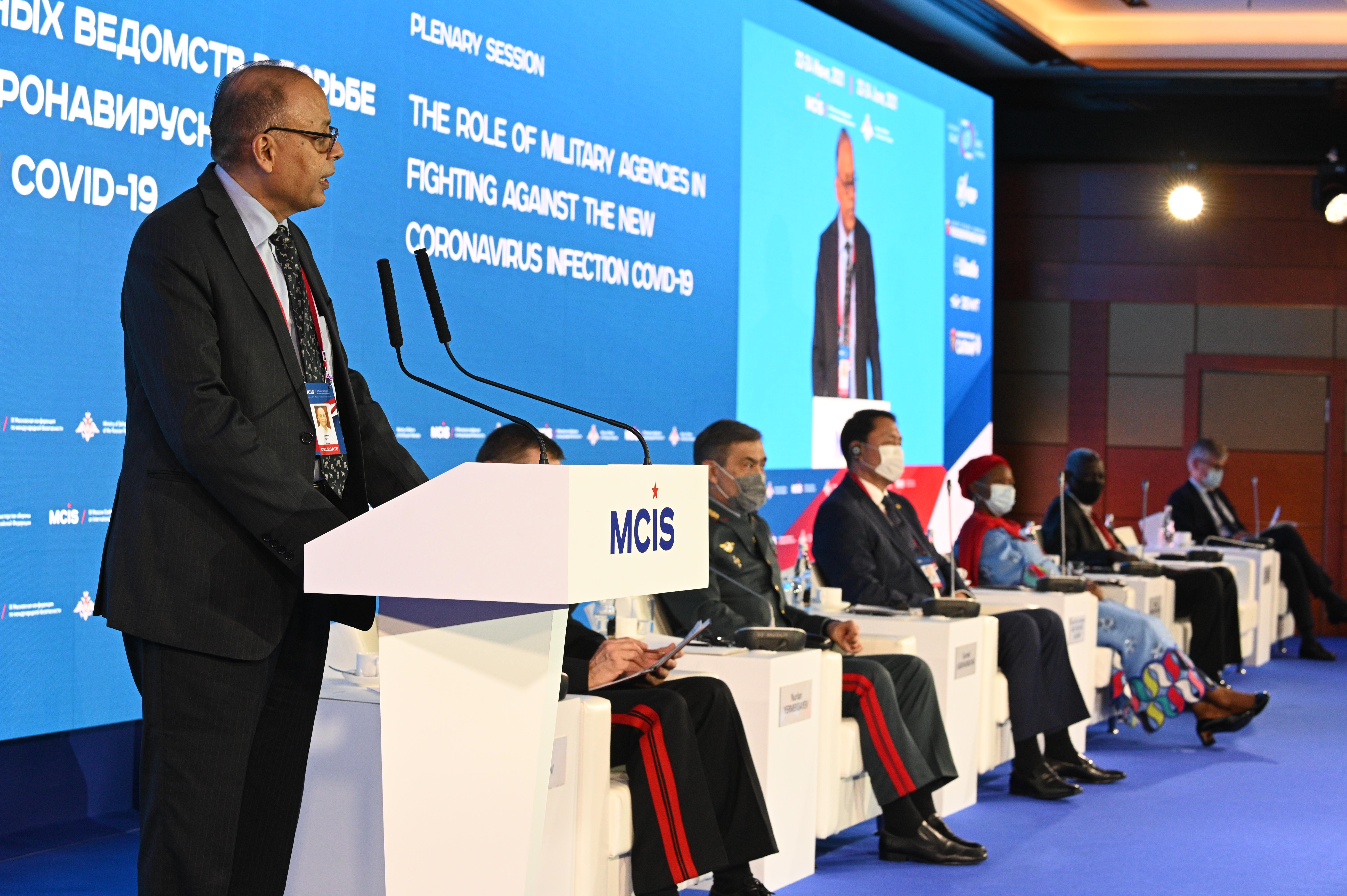