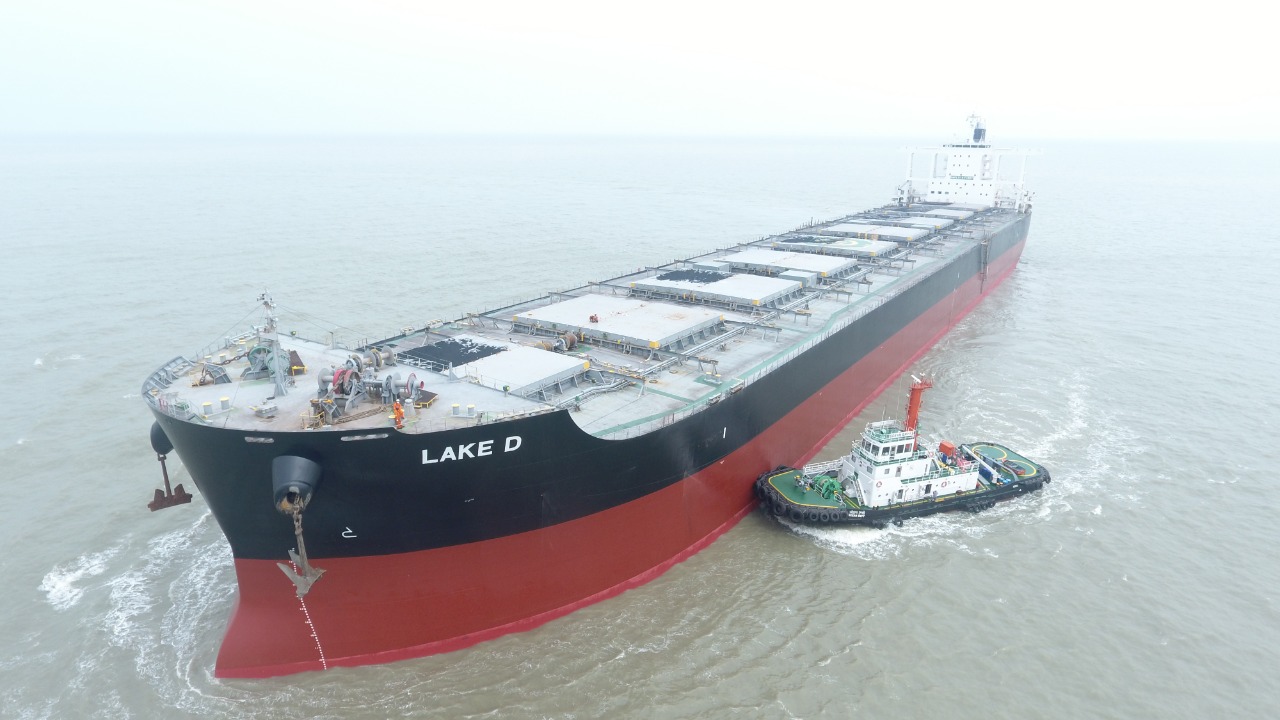 Ministry of Ports, Shipping and Waterways CAPE SIZE VESSEL CALLS AT SAGAR FOR THE FIRST TIME IN THE HISTORY OF KOLKATA PORT Posted On: 08 JUN 2

The historical milestone was achieved at its zenith on 8th June, 2021 when ‘M.V. LAKE  D’, First Cape Vessel Panama Flag arrived at Sagar Anchorage which is 80 Miles away from Syama Prasad Mookerjee Port, Kolkata (SMP, Kolkata) and 25 Miles away from Haldia Dock Complex (HDC).

‘M.V. LAKE  D’ one of the largest Cape Vessel of its kind with 66,000 MT of Steam Coal cargo bound for Nepal, built in 2011 is manned by 20 Filipino crew was anchored at Sagar.  The vessel sailed from Abbot Point, Australia on 10th May 2021 and enroute took fuel at Singapore. There after discharging about 95,810 MT of cargo at Vishakhapatnam, vessel sailed for Sagar anchorage.

SMP Kolkata is having constraint of draft in the channel and lock gate operation in the docks. By doing lighterage operation with this vessel which has a very wide beam and can carry higher parcel load in draft of 9.2 metre. The  cargo ship  will go directly to a floating jetty, thus lock gate operation will be avoided and barges can go fully at any time & discharge at Haldia floating Terminal. An investment of Rs.170 crores has been done for floating crane and floating jetty. It has been an endeavour by the Port to encourage Trade to mobilize full load vessel especially Cape vessel for bringing cargo for Haldia Dock.

Shri Vinit Kumar, Chairman, SMP, Kolkata stated that the arrival of ‘M.V. Lake D’ is significant, not only for being the 1st Cape vessel at Sagar, but also for carrying 66,000 MT of cargo which otherwise would have been carried in 2-3 separate vessels. Alternatively, this quantity could have been carried in one vessel which would have had to discharge half cargo at Vizag Port and carry the remainder to SMP. Because of this substantial growth of lighterage operation, coupled with the multi-dimensional user-friendly measures like better service, improved facilities, cost-effective customer-friendly charges and effective co-ordination among other relevant agencies, Kolkata Port Trust as a whole will be able to handle more than 65 million tones of cargo during 2021-22.