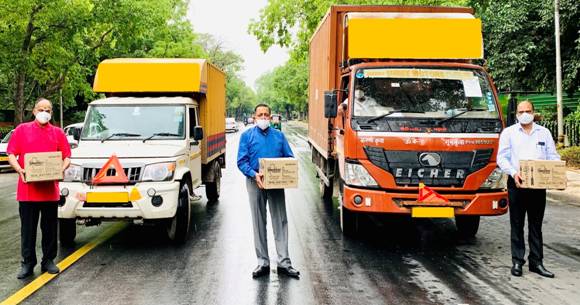 While sending off the consignments carrying separate kits containing face masks, sanitizers and other accessories, Dr Jitendra Singh said, the earlier consignments of COVID related material arranged by him were sent to all the six districts of his Lok Sabha constituency of Udhampur-Kathua-Doda. He said, he had now sought to arrange similar consignments for other parts of both the regions of Jammu and Kashmir. Dr Jitendra Singh said, it is not easily feasible to arrange very huge supplies from voluntary sources but he, with the cooperation of like-minded citizens, will try to reach out as far as possible to different areas of the Union Territory of Jammu & Kashmir. Because of the lockdown conditions, he said, the transportation of the material and its further distribution in different parts is not an easy task, particularly in the wake of varied topography and difficult terrains of Jammu & Kashmir. However, with the help of colleagues and youth activists, he has undertaken the task of sending the COVID material, wherever he can.

Dr Jitendra Singh further informed that even though he is convalescing after an episode of COVID infection which required hospitalization, he is maintaining contact at different levels in the Union Territory of Jammu & Kashmir as well as the North Eastern States. He said, he has been regularly in touch with administration in different districts as well as the Medical authorities of all the Government Medical Colleges in both the regions of Jammu & Kashmir including the Sher-I-Kashmir Institute of Medical Science (SKIMS), Soura. He expressed satisfaction that as a positive outcome of nearly five days of consecutive daily deliberations, the COVID facilities at Government Medical College Jammu have been benefited and there is better coordination in the functioning.

Dr Jitendra Singh appreciated the community work undertaken by BJP Karyakartas and several voluntary agencies. He appealed to the critics who find alleged faults that they should instead come forward to correct these faults, if any.

Dr Jitendra Singh once again reiterated his call to all political parties to rise above differences and unitedly fight India’s war against COVID, led by Prime Minister Narenda Modi. He said, this is a calamity of the century and all of us are expected to strive together.