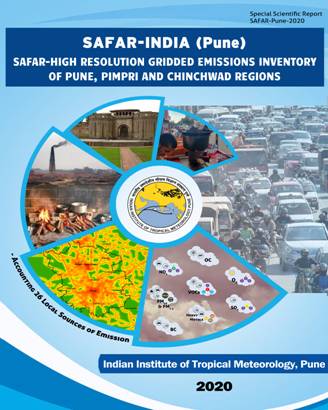 The emission inventory campaign has been led by Indian Institute of Tropical Meteorology (IITM) Pune under the Ministry of Earth Sciences along with SPPU, Pune and under expert advice of Prof. Saroj Kumar Sahu of Utkal University. Geographical Information System (GIS)-based statistical emission model developed by scientist of IITM is used to develop fine resolution of 400m gridded products.

Around 6 months long emission inventory campaign involving more than 200 students from IITM, SPPU and Utkal University was carried out during 2019-20 in Pune Metropolitan region including Pune, Pimpri and Chinchwad regions with around 2,50,000 hours of work. This exercise was tocollect real time primary activity data of 26 differentlocal sources of air pollution.

The click counters, low volume samplers and various survey forms were used to get activity accounting.This exercise was earlier done in 2012-13 at the advent of SAFAR system with a resolution of 1km. Since then significant changes have occurred in land use and demographyand many new sources, which were earlier ignored, have now been quantified.Emission inventory is a scientific way to identify aggregated local source contribution and their region specific spatial distribution within a confined boundary like PMR. It is more effective tool to identify hot spots and plan control measures. The highlights of Emission report is as follows:

A comparison of earlier (Yr-2012-13) emission inventory with the current (Yr-2019-20) inventory in PMR suggests a significant increase in Pune’s overall emission load. The air quality of Pune is mainly regulated by particulate pollutants (PM2.5 and PM10). A significant growth in the emissions of particulate pollutants has been observed during the past seven years. An increase of 70% and 61% is found in PM2.5 and PM10 respectively from 2012-13 to 2019-20. There has been an enormous growth in the number of vehicles in PMR during the past decade. Transportation sector is found to be the major contributor in PM2.5 emissions as compared to rest of the sources. Though industrial production has increased over the years, emissions show a minimal rise as compared to other sectors. This might be due to the improved fuel quality used in units, efficient technological innovations and stringent enforcement of standards. Similarly, a significant increase is observed in the emissions of Organic Carbon (81.3%), NOx (72.8%), and VOCs (69.8%). Sulphur dioxide emissions show a 30.2% increase, lowest amongst the eight pollutants considered in this work.

The emission estimates in such high resolution by SAFAR are likely to serve as an essential information base for scientists, policymakers and NCAP program of CPCB. This report also provides the rate of change in anthropogenic emissions of atmospheric constituents during the past seven years.