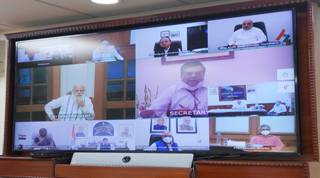 Ministry of Chemicals and Fertilizers

Subsidy on DAP fertiliser hiked by 140%

The government has increased the subsidy for DAP fertiliser from Rs. 500 per bag to Rs. 1200 per bag, which is an increase of 140%.

🔶The government will spend additional Rs 14,775 crore for this subsidy in Kharif season.@PMOIndia @PIBBengaluru@fertmin_india @PIB_India It may be noted that prices of Phosphatic and Potassic (P&K) fertilisers are decontrolled and manufacturers are free to fix MRPs of their product. In recent months, international prices of finished fertilisers like Di-ammonium Phosphate (DAP) and its raw materials like phosphoric acid, ammonia and sulphur have seen huge jump of 60 to 70 %, which in turn has been putting pressure on their domestic prices. There were reports of DAP being sold by fertilizer companies at increased MRP of Rs 1900/- per bag in the month of April, which was an increase of Rs 700/- bag from price prevailing in the month of March. Similarly, domestic prices of other P & K fertilisers surged by almost 50 %. Fertilizer being critical input for agriculture operation, these were increasing hardships of farmers.

In view of this the Government, keeping in mind the interest of the farmer, took a prompt and proactive action  to address the hardship of the farmers. A High Level Meeting was chaired by the Prime Minister on 19 May, 2021, in which the Prime Minister directed that there shall be no increase in price of P&K fertilisers, and that the Central Government would bear all the burden of price increase for the upcoming kharif season as a one-time measure to reduce hardship of farmers during the covid period.

The subsidy rate for DAP has been enhanced from Rs 511/- per bag to Rs 1211/- per bag, an increase of Rs 700/- per bag. This will ensure that DAP will continue to be available to the farmers at last years’ price of Rs 1200/- per bag. Subsidy on DAP fertiliser is hiked by 140% The price of other P & K fertilisers will also reduce to around last years’ prices. The Government will spend additional Rs 14,775 crore as subsidy in Kharif season.

Read this release in: Hindi
OI-News 2038