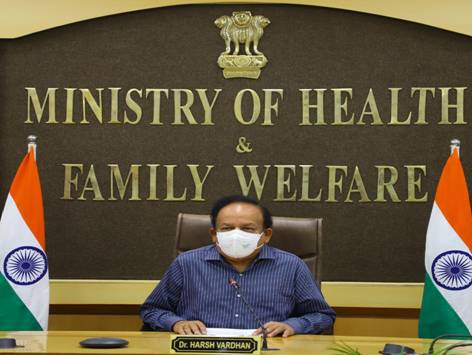 Country is now Better Prepared Mentally & Physically with More Experience to Beat the Pandemic as Compared to 2020: Dr. Harsh Vardhan

The Union Minister for Health & Family Welfare, Science & Technology and Earth Sciences, Dr. Harsh Vardhan today inaugurated a series of blood donation camps at 13 different locations in Chandigarh, Punjab, Haryana and Himachal Pradesh through a webinarin the presence of Minister of State for Finance and Corporate Affairs, Shri Anurag Thakur.

The blood donation camps are being organised by the Competent Foundation with the help of various associations, NGOs and blood banksin wake of fulfilling the blood requisition due to Covid pandemic. Addressing the webinar, the Union Health Minister appreciated the efforts of the foundation to organize blood donation campswith more strength and expansion for fulfilling the blood requirement due to Covid pandemic. He said that giving blood has many benefits for the donor personally while also being a big help for the entire humanity. Calling more people to the noble cause, Dr. Harsh Vardhan exhorted masses to atleast donate blood once a year on their birthdays as it is a big help for humanity. He said that in his opinion, donating blood is even more pious than visiting revered holy places.

The Union Minister said that Prime Minister Shri Narendra Modi had launched the largest vaccination drive in the world in January, 2021 which is now being accelerated further as the vaccination of young people is about to begin from 1st May.He also said that in 2021, the country is better prepared mentally and physically with more experience to beat the pandemic as compared to 2020. He appreciated the fact that this blood donation camp has been set up following all COVID protocols, guidelines and SOPs. He said that the blood donation drive is being done before vaccination of youth which is commendable as after being vaccinated it is advisable to not donate blood for 2 months.

The President of Competent Foundation, Shri Sanjay Tandon said that this year the Foundation decided to organize blood donation camps beyond Chandigarh tricityin 13 different locations across the regionwith more strength in the wake of fulfilling the blood requirement during theCovid pandemic. He appealed that in the middle of Corona epidemic, blood donation has become more important because in the midst of deepening crisis, the supply of blood has become extremely difficult. Hence, he called upon the people, especially the youth, to be a part of this noble cause.

Loading...
Newer Post
169 Covid Care Coaches in use in different parts of India now
Older Post
Australia-India-Japan Trade Ministers’ Joint Statement on Launch of Supply Chain Resilience initiative
Cyclonic Storm " Tauktae " Intensify during next 12 hours and is very likely to intensify further during the subsequent 24 hours; very likely to move north-north-westwards and reach near Gujarat coast by 18th May morning